Elvis was metrosexual; but was he Bisexual? 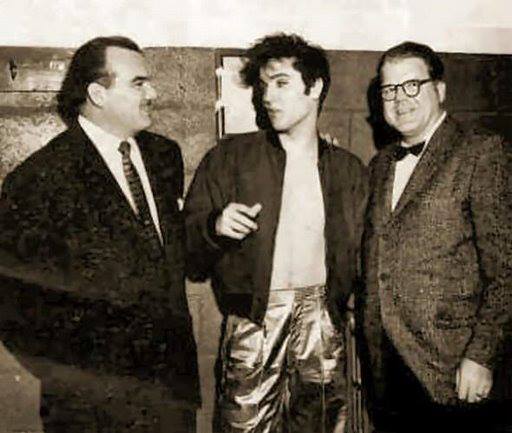 I have been really curious to get this book, since it might explain a gap in the Elvis cannon.

Elvis having had the rumored affair with Nick Adams makes sense. The James Dean worship and I expect that Elvis – once the terror of girls to the point that they teased each other with taunts of “Elvis likes you”.

so desperate was he to give his heart away.

At age 13 a very impulsive and obviously very much in love Elvis forged a Marriage License from his parents original placing his and Articles about Elvis Presley Elvis Presley Photos Magdaline Morgan’s names on the certificate. Elvis knows Magdaline from the First Assembly of God Church. He writes in September 11 as the date of their ‘marriage’, something which Magdaline expresses great surprise when she learns of it almost 50 years later.
http://www.elvispresleymusic.com.au/elvis_presley_1935_1953.html

That I expect that once Elvis was being chased by all the girls, that what he had to work to get, might have become more interesting to him.

But that’s being silly really. All the sexuality studies show that men are hard wired and women are flexible – I think it’s down to that women have 100% dna and men have only 87.5%.

something is missing from their code, it’s why hemophilia occurs in males and extremely rarely with females – gender based illnesses are the occurance of a recessive gene or two recessive genes – you can have a recessive and a dominate and be a carrier – not a impacted person.

it makes sense that sexuality is a multi coded sequence and that expression of same is a product of the nature of nurture and the nurture in the nature.

So Elvis, being a sensualist and an emotive amplifer – makes sense that he would be bisexual – and given the stories shared by the memphis mafia in trying to make Elvis to be the pervert… well. they were the ones doing what he said. it was a group effort.

Nick had a small part in Rebel and this is Elvis impersonating Brando.

When I was in Memphis in 1987, I bought a copy of this photo in a gift store. I had never seen it before and the homoerotic factor hit home a while later in a Georgia Straight newspaper interview, Jerry lee Lewis – at the time of the Dennis Quaid bio-flick, talked about him and Elvis riding bikes nude and that if anyone knew then what they had gotten up to – both of their careers would have been over.

during the pregnancy, Priscilla wrote that Elvis asked for a separation – and she never knew or didn’t explain what the cause of it was for Elvis

and none of the memphis mafia books say either

now this is another curious relationship in Elvis’ life – Eddie Fadal 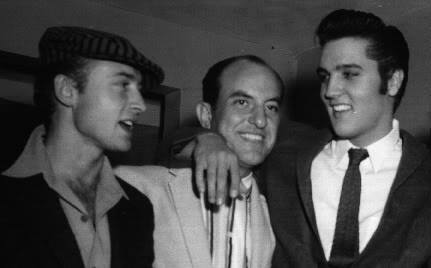 The first bootleg album I bought was the Forever young and Beautiful put out by Paul Lichter and recorded by Eddie at his texas home – where Elvis hung out off base.

Eddie Fadal was a DJ and his children scream throughout the recording – so with all the digital tech – we should be able to clean that up. seriously – I mean cool to hear what an evening with Elvis was like. but trying to ignore that screaming kids nonsense……..

on the other hand. the FBI files on Elvis include him having a very negative reaction to a cosmetic snake oil salesman who Elvis turned to while in the army, when the man groped him during a skin cream applying session.

But then, there’s welcome and unwanted behaviours and no one gets to just help themselves to your person.

the point of being in the closet, is after all discretion.

Elizabeth Scott’s career never recovered from the lesbian label being applied to her after she was in Loving You with Elvis.

it’s difficult to sue for defamation when the allegation is true.

I read his book – The Elvis I knew – and watched his interview where he basically repeats the book.

I think there’s a very clear reason why Charlie Hodge gave up his own career to be the guy who handed Elvis his water and scarves….

32 Responses to Elvis was metrosexual; but was he Bisexual?