Despite Ginger Alden’s being the last official Girlfriend of Elvis – there was, in the wings in 1977, Alicia Kerwin. She was also 19 to Elvis’ 42, and his insecurity at being really liked and trying to impress the girl showed with his over-generous spending sprees. 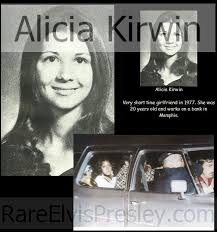 George Klein had her lined up to replace Ginger Alden, who was not liked by Elvis’ group, they missed Linda Thompson and Ann-Margaret before her.

April 1977, she attended an Elvis concert and vacationed with him and he bought her a car.

Ginger Alden had been part of the cancellation of Elvis Presley’s last scheduled studio sessions, but he sang his heart on the tour dates she was there – showing the fans and media of the day, what a powerful performer he could be when not sleepwalking through shows.

The Hayride and Elvis & June

ElvisWorld: Where the King Once Slept…

Elvis was metrosexual; but was he Bisexual?