I have been waiting for this book since 1980. It was better than I imagined.

I have never read a book so bold, so calculated and contained, yet utterly revealing at the same time.

Elvis had it bad for Debra Padget, who had a stage mom with an eye on Howard Hughes, not a hillbilly wiggling wailer.

Priscilla, the only one he did marry – doll sized, cheekbones and even once tried blonde….

Cybil Shepard in there too

the last nine months of his life

She glosses over the cancelled last recording session, she mis-identified Felton Jarvis as just a sound guy, indictated that Ann-Margaret and Elvis had made films together rather than just the one. The utter lack of basic Elvis career information was kinda funny and suggests a certain honesty.

Certainly, it is a whirlwind romantic tale of being flashdanced from the middle class into fame. Well, not exactly, since all three Alden girls pursued pagent titles at the municipal to state level.

Gosh Gee, how did that amazing thing happen is an odd tone; but give merit to the public image of her being totally out of her depth.

Honestly, the story about Elvis showing her how to apply mascara to make your lashes appear longer was well worth the price of the book.

As for Elvis looking foolish with the Numberology, Astrology and other California Wackjobbiness introduced by Larry Geller – frankly, it is no more whacky than all the bible reading.

Perhaps if Elvis had found people worthy of his generosity and he paid less attention to various leeches, what real impact he could have not brooding on supernatural superstitious selfish self enlightenment….

But the third pill packet delivered by Aunt Delta certainly has been an underplayed variable. 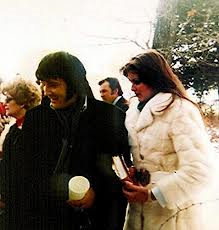 Ginger Alden’s husband has died August 16, 2015 of a sudden and unexpected heart attack.