Posted on September 7, 2018 by dykewriter
I saw an article in Xtra on the Daily Xtra online about the Simon Fraser University Lesbian Oral History Archive project, and I had been a student at SFU, where I was a dj on the student station CJIV and wrote for the student paper The Peak.
https://alotarchives.org/
and
https://www.alotarchives.org/about
it is one way to make the part grassroots work and work product mean something more than memories.
From Documenting Life to Examining it

Lesbian icons Virginia Woolf of the bbc broadcast, and a Greta Garbo audio speaking recording that I collected at in the 1990s 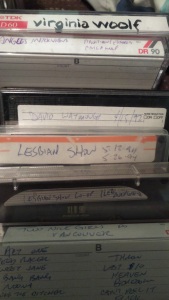 and cassettes of Nina Tryggvason, Student DJ on CJIV.

While I was not yet out, I was playing Phranc, kd lang and 1930s queer blues

Listening to the double cassettes of the “Nina’s Nonsense” 3 hour radio program, wherein the last hour was overlapped with another DJ, with whom I was friends, and part of the group I did the Rocky Horror Picture Show Theatre Group with. I once did Rocky to her Janet for the toucha scene.

as well as a cassette of the sissyman blues cd, and a cassette with my show intro on one side and a John Cage inspired SFU class assignment on the other.

Additionally, I am including the halloween sound effects tape from the last show, and a 1987 cassette tape purchased at Sun Records in Memphis Tennessee in 1987 of 1950s DJ Dewey Phillips show one of the times he play “That’s Allright Mama” as radio history.

During the end of the CJIV era, several of the Radio station staff were swept up in pirate radio, and during one of my shows, the police phoned ill timed after a poorly thought out joke to advise that a large number of LPs had been located during a criminal operation.

also at that time at SFU the student paper and the student radio station were at odds with each other, and I was only at SFU for three semesters.

Iceland President Vigdis Finboggadottir interviewed by Nina Tryggvason 1988 with Greta Garbo in victoria by Niels Petersen on the other side of the cassette.

and as a volunteer reporter for the Vancouver Gay and Lesbian newspaper, during it’s change to Lesbian Gay and Bisexual to LGBT. so, for the SFU Peak as well as Angles.

There are eighteen issues of Angles from May 1992 July 1994, during the period of my participation as writer, photographer, graphic layout and editor, from it’s 1980 to 1998, when publication ceased, after the efforts of 1,000 volunteers.

The interviews collected at my first May 29, 1992 two rallies, one at the art galler for Abortion rights and the other at st paul’s hospital regarding euthansia, and the group of us locked out, who staged a kiss in. 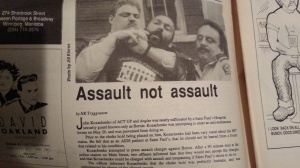 Interview with Filmmaker Carla Wolf may 14, 1992

a cassette of a broadcast about Canada’s then first openly gay priest Tim Stevenson on Christian monitor radio, which includes an audio interview of me as the editor of Angles.

cassettes of the Lesbian Co-Op radio show with the Vancouver Chapter of the Lesbian Avengers as guest interviewees live on the air dates of May 12, 1994 and May 26 1994 with another unknown date in the same time period.

the Gay And Lesbian Newspaper of Vancouver BC Canada begins its shift to Lesbigay, before the Drag and Trans communities were included under LGBT and LGBTQ 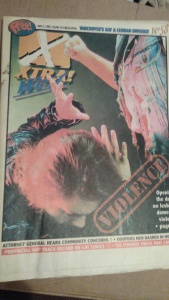 The Forgotten Queers of 9/11

Then British Columbia Attorney General meets with The December 9 Coalition

the Gay And Lesbian Newspaper of Vancouver BC Canada begins its shift to Lesbigay, before the Drag and Trans communities were included under LGBT and LGBTQ.

When Angles folded, it was the LGBT newspaper and there was 1,000 names of the volunteers from every issue going back to the 1970s.

Your blogger, was the news editor and one time covergirl – Santa Dyke

The costume shop did not want to rent the costume to me, eh. 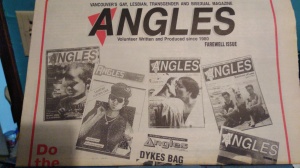 the last issue of Angles listed 1,000 volunteers from the 1970s to when it ceased publication.

glossy magazines of the 1990s shared shelf space with newsprint newspapers and zines, while the internet web 1.0 was just starting to have email replace phone trees and websites with gay and lesbian history

Girlfriends Magazine – I had two articles that I co-wrote with Lisa Smedman published in the left one, along with a few other articles in a Breast Cancer special edition of the magazine; and they won awards,  republishing in 2005 as in an anniversary edition.

I had originally written them for Xtra West in Canada, but the article didn’t run and Lisa Smedman, another Vancouver lesbian writer did an article which didn’t run in another magazine, – Cindy Filepenko’s departure from Xtra West/Pink Triangle Press over NAMBLA and the International Gay and Lesbian Association’s UN intervenor status, to starting her own magazine,- saga in the video- so we combined them and were published in the American glossy “Girlfriends” magazine instead.

this is a video of me talking about the Girlfriends Breast Cancer articles. 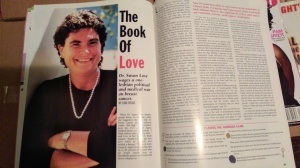 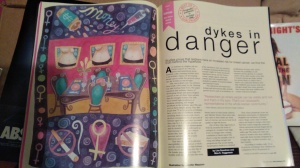 1999 was the first Vancouver BC Canada pride parade that was broadcast on regional television and it was also the first pride parade that Canadian federal government employees marched in – from Revenue Canada. In the last 30 minutes of the broadcast, which filmed the parade units as they finished and reached the beach where the community events mix and mingle and stage entertainment starts.

before the crowd of watchers along the route disperse into local business, back home or to the beach.

and these era lapel pins, including a Better Baxter Vancouver Centre campaign button, the only political campaign I stuffed envelopes for. 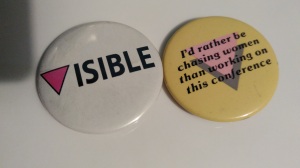 Today, I went to SFU to donate my babydyke archive

it was weird to be in the AQ, now a building of offices

when it was classrooms and lockers when I went there. 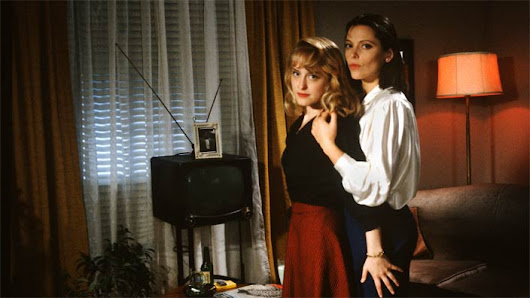 Being an Over-experienced community volunteer…

Today, I volunteered at the Qmunity Centre