The Limits of Gnostic Knowing Revealed

Posted on November 6, 2015 by dykewriter

It’s not a surprise to me that the public forums where people debate religion quickly turn into name calling and insults.

It is difficult to have an actual conversation or debate when the basic terminology isn’t being used to mean the same things.

There seems to be a common misconception – mostly with theists – that there are three positions in the debate:

These three terms do not reflect the spectrum of belief to non-belief nor are the meanings correct.

Theism and Gnosticism are different things entirely and adding the “a” prefix, reverses the meaning of the word.

We have not three positions of belief – sort of like how people also erroneously think there’s three sexual places on that spectrum of straight, bisexual and gay – but really there’s two positions faith and knowledge with the setting to on or off.

Theism is the belief that there’s deities. Atheism is no belief in deities.

Aside: “no belief in deities” is not the same as “belief in no deities”

Gnostic is not about what the belief is, but rather it’s a position on the nature of knowledge itself – so the gnostic knows and the agnostic isn’t sure we can know.

Which puts theism and gnosticism sort of like genes – you can have the gene, but whether it’s turned off or on is a separate matter.

Atheists could be called agnostic atheists, but in the modern sense of the word, the idea of knowledge is blurring into atheism.

I think that it’s partly because atheists tend to be comfortable with not having an answer to questions. We don’t know yet with the current state of technology and understanding. We’d rather leave the answer a question mark than insert “goddidit” as a place holder.

Since “goddidit” provides no meaningful answer at all.

We might find out in our lifetime or we won’t. Either way, we’re going on with the one life that we know we have, being the best person we can be. What more is there, really?

The word “atheist” is used by religious people as a pejorative in the same way that some people (the religious ones) used to use words like “gay” or “queer” against another group of equally reviled folks. (and woe to us gay atheists!)

There is nothing wrong with not believing in god – except to the people who do – they seem to take it as a personal affront to their beliefs when they are not shared. As if it invalidates them somehow.

You would think that believers would be threatened more by believers of other faiths – but instead of all out crusades as in previous centuries – in the last century the veneer of civilization made uneasy allies of religious groups with the ridiculous idea that they are all about the same god but worshiping in different ways.

This makes no sense, since each god demands worship in a particular fashion, with dire consequences for failure.

The reason that atheists, gays/lesbians, childless by choice het couples or single moms by choice are so threatening to the righteous religious people is because these groups are dangerous to the religious idea that you must marry an opposite sex person and breed children in order to be happy, successful and worshiping the deity of their choice.

That atheists, gays, lesbians, bis and trans, childless or single parents can and do live happily, morally and successfully is threatening and dangerous as it is not compatible with the religious creed that one can only be these things when you are enslaved ….er … worshiping the correct god.

Since the religious righteous live in terror for themselves and their children – they do not want their children to grow up and be anything that doesn’t conform to the norm. Especially when a grown “child” not being what their parents were/are appears to be a rejection of what the parents stood for.

Often without any awareness of the irony if the parents deviated from the grandparents….

So, let’s be very clear.

People who are secure in themselves and their beliefs are not threatened or concerned with what others believe or how they live.

People are entitled to have whatever belief or not that they want – where civilization breaks down is when one person/groups’ beliefs are imposed on other people. Which is why actual separation of church and state are essential to a democratic and free society.

If you’re not convinced, compare the Scandinavian countries and to some extent, Canada, against any religious theocratic country – in terms of crime levels, health care, standard of living, civil rights and pretty much any measure. 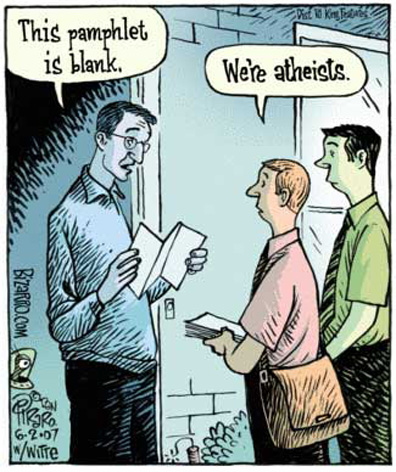 We’re aggressive, offensive, immoral and don’t work and play well with others – in short – all the things that the Religious Righteous are themselves but project onto others.

Aside: We always hate in others what we are ourselves.*

* Not ironic or without self awareness, as I fight my tendencies towards being a dogmatic rules lawyer and policy wonk daily.

It comes down to the Religious Righteous being threatened because atheists are no longer staying quiet or in “our place”.

Any time there has been a group that is no longer content to be legally and socially less than, well, straight white males with wealth, those groups are threatening to the status quo and so are painted with the same brushes:

Aside: “Status Quo” seems to be a lot like “The Popular Kids” in high school, they are the top of the social scale, but no one actually likes them. So, how did they get to be the popular or the status that everyone else is deemed lacking in comparison and value.

The problem with the “respect” is that what is meant is entirely different and that is “reverence” – and this is the most important aspect, because the rest all stem from this aspect. The problem for the Religious Righteous is not how the questions are asked, but that they are asked at all.

Religion cannot be separated from discrimination, as both come down to the same belief that “my” group of people are special and better than all other groups.

Every social advance is a rejection of the Religious Righteous’ status quo and is not reverent or deferential:

There have been atheists for a very long time – back to ancient Greece in fact.

These atheists were very outspoken, so the so called new atheists are really getting back to the roots – coming out of centuries of shadows that religion pushed us into under fear of death.

Aside: Given how medievally Pope Palpatine dresses and his stated goal of reuniting all xtians under his thumb..er…under the Catholic Church…I can only assume he longs for the days of absolute rule and being able to force hemlock martinis into science minded folks .

What’s more interesting than all the Religious Righteous’ engaging in childish name calling and discrimination is the discussion going on with the so called New Atheists – and that is how the New Atheists are looking to the Gay Rights Movement for strategy.

Because in a relatively short time, gays have become a part of the mainstream and even status quo fabric in many places in a much faster and less violent manner than any earlier wave of social change.

Part of it is that no one is calling anyone the “New Gays” despite a certain accuracy of that phrase.

In entertainment, gays are no longer the ill fated suicide or murder victim, not the Nelly or Sissy Boy, not the sexually threatening Diesel Dyke preying on innocent school girls.

Gay characters in entertainment moved quickly after the 70’s – going from the earlier stereotypes of shadowy and miserable but occasionally fabulous to real people coming out and standing up for themselves to plain folks just trying to make their way in the world the same as anyone else – but with a better sense of fashion and wittier.

In real lives,  when I came out in the 90’s, it wasn’t illegal or likely to result in being locked up in a mental institution like it was for people who came out in the 70s or earlier.

But, it was legal for me to be fired, evicted, denied promotion, not be legally protected from sexual orientation discrimination and the idea of gay couple rights was nothing I expected to live long enough to see.

But, in the last decade – in Canada:

Gays coming out now, have no idea what it was like for gays in the 70’s, never mind the 50’s and are generally horrified that there was a time you could be fired for being gay, never mind beaten up by the cops for it.

That is what scares the Religious Righteous the most – they are increasingly preaching to the converted.

There certainly are new gays, but until atheists achieve a mainstream momentum – as evidenced by a politician declaring themself an atheist would not make them unelectable.

Unlike other social movements, there has been few atheist characters in entertainment and there isn’t a strong stereotype of atheist, which makes social measurements more difficult.

Most entertainment – TV and movie characters – tend to be vague on a character’s belief system and only in the last decade have there been overtly atheist characters – like House, MD and Bones – both medical procedural programs.

When more kinds of characters in movies and TV are specially atheist – rather than merely refraining from being overtly religious – then we could start to say that there’s such a thing as a new atheist.

Because not too long in the future, the mainstream will be surprised that being an atheist was ever an issue.

2 Responses to The Limits of Gnostic Knowing Revealed