didn’t we already consider that?

However, many, including Stephen Hawking gave his blessing to the particle accelerator.

“The world will not come to an end when the LHC turns on. The LHC is absolutely safe … Collisions releasing greater energy occur millions of times a day in the earth’s atmosphere and nothing terrible happens,” said Hawking.

Cern writes on their website “The LHC Safety Assessment Group (LSAG) reaffirms and extends the conclusions of the 2003 report that LHC collisions present no danger and that there are no reasons for concern.”

“Whatever the LHC will do, nature has already done many times over during the lifetime of the Earth and other astronomical bodies.”

https://www.nzherald.co.nz/world/news/article.cfm?c_id=2&objectid=12135674Earth could shrink to 100m across if particle accelerator experiments go wrong

it is not the science that is the hard part…

but can we leverage it now.. solar collectors

and how are we running out of sand when this is full of it?

I remember seeing people on the news refuse to leave

saying the expert’s don’t know. well, experts do not know everything

but they do know better than people who assume rather than learn.

in this case, one of the Mt St Helens dead was the expert

who thought three miles would be far enough away

meanwhile, on the internet…

this is why you were called “religitards” and now the word “Godbot” has memed, so as to not be cruel to people who were born mentally challenged, and only apply it to people who chose to not use their brains.

You claim to know – gnostic, but you have no way to know, your book is pure trash, and the science that puts paid to religion is anthropology, not biology. so that’s the other reason religion loses, fights the wrong battle ground, and the one place it had – ethics and morals, is better served by philosophy, given all the Pedophile Preists, Televangelist adulterers and embezzlers, and Jonestown, from where the kool aid drinker meme arises… you brag your stupid is better than everyone else’s smart.

honestly, in that photo, he may as well just be pointing at his own dick, Glandbots and their authority issues, eh.

I used to think that Apologetics was to apologize to the outside community – sort of a spin doctor/white washing – to say, oh that was then and this is now sort of …..

but from this book, I learned that they are the last line to keep people in

the so called Cafeteria Christians, Cherry Pickers.. whatever names they call the people in differing sects of the same version within the Abrahamic Trilogy

to discover what goes on inside a community you are not part of is astonishing – and what they tell each other, without thinking what an outsider reader reads.

There are no academic standards in religious scholarship, and no religion “post secondary education” institution should be permitted to grant degrees in areas actually served by the legal and medical professions, which have Professional Oversight.

Letters from a Skeptic, revisited 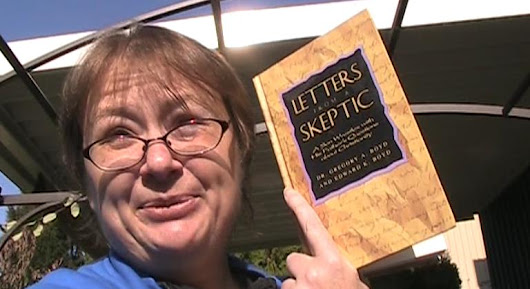 dear godbots: this is the real world impact of religion:

this is why Blasphemy is Duty, where not punishable by death

dear people with a relationship with reality:

A study published this year in the journal Prehospital Emergency Care concluded that 16 of the victims might have lived if they had gotten basic EMS care within 10 minutes and made it to a trauma hospital within an hour, the national standard. That’s nearly one third of victims that died that night.

“Those 16, they had injuries that were, potentially were survivable,” said Dr. Edward Reed Smith, the operational medical director for the Arlington County, Virginia, Fire Department, who reviewed autopsies of those who died with two colleagues. Smith, whose department was one of the first in the country to allow paramedics into violent scenes with a police escort, has reviewed more than a dozen civilian mass shootings using the same criteria. “How would they be survivable? With rapid intervention and treatment of their injuries.”

A separate Justice Department review last year concluded “it would have been reasonable” for paramedics to enter after 20 minutes, a different time frame from the one Smith analyzed.