A White Man Threaten To Kill Me

It turned a so-so outing into the worst one ever.

My Mom and I went to the Fresgo Inn for a disappointing brunch, first time ever, on King George Highway, Surrey BC.

Then, over to the Mall, were I got a wheat grass with a pineapple chaser, and a moderate walk around the complex. Jen, my usual Booster Juice Gal was not there, she works weekdays and I had forgotten that week/weekend concept a while ago, days blurred into sameness – as the world around spins.

Last stop, the Safeway. Inside the store, nothing untoward.

It was in the parking lot, I was putting away the cart and I could hear a man say, “say in the car, we’re only going to be 5 minutes.”

from the tone of his voice, I thought he was talking to a dog.

and it was already sweltering in the afternoon sun

the woman had walked away and the man had followed her from their car, parked beside ours

I didn’t see a dog in the window. or a person

I was just getting into the car, when it dawned on me and I said to my Mom, in our car

“Are they leaving a child in that car?”

I looked over my shoulder to see the man turn back

He was a white man, over 6 feet with big shoulders and a powerful build, but he had no tattoo and had hair, and was dressed like a jock confused that high school was over.

His wife was just over 5 feet tall and of a different ethnicity, so nothing like Neo-Nazi or biker suggested itself to me

“Mind your own business” he barked at me. He claimed he was kidding, but the toddler was under 5 and not capable that that level of understanding and would only know it was left in a hot car and the parents walked away.

“I’ll call social services.” I said, standing my ground – which is also known as moral ground, and applying ethics and socially capable concepts of a village raising a child, eh.

at that point, his body stiffened and his pose was posturing, he threated to hit me and knock me to the actual ground

“I will kill you.” he said and he got his child out of the car.

I continued to stand my ground. He and his wife and child went into the store and I got into my car and drove home. rather in shock.

on a hot day

where he left his child, a toddler in the car

and his response to a stranger’s concern, was to threaten assault and murder

he would not have even known I am a lesbian

anyone who thinks that his behaviour is acceptable towards another person

and this is Canada, if that had been in America, I would probably have been shot to death

anyway, next time someone asks me to think about the children

I am gonna make them read this

I drove home, and what I should have done was write down his license plate number and returned to the store – Safeway, and have their security bring in the police – which is RCMP

and me, in the RCMP vs women class action.

which, already trying to manage that confrontation caused panic attack – and knowing my Mom bought frozen foods…. this is not supposed to be Canada’s reality.

Now, the above video explains a bit about my background with an incident from my RCMP employment and for the interests of public safety and self defence:

the man was standing far enough away from me that if he had moved towards me, I was hardly going to stand there and allow him to assault me.

I had a few options

If I had thought they could or would be of help, go into Safeway – which I later did report the incident to a cashier and not customer service

but mostly, men need to understand that they may not verbally threaten or physically intimidate other people and they need to own when they are wrong and not become violent and then behave as if they were somehow in the right at any level, in what is supposed to be a civilized society

Asking If A Transgender Person Had Surgery Is A ‘MICROAGGRESSION’ Now

Other people have no right or need to know more than the public presentation of one’s person.

You need to offer and include other people in that

do not ignore that the most dangerous and threatening demographic

is Heterosexual Males of all ethnicity.

Washington anti-transgender campaign fails for second year in a row 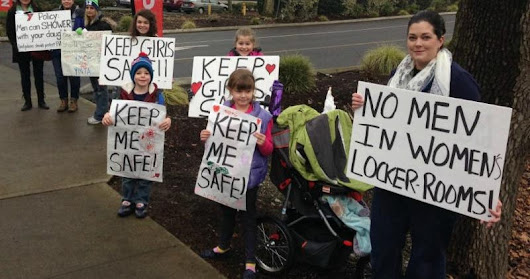 16 Responses to A White Man Threaten To Kill Me