Posted on March 17, 2017 by dykewriter
Germany is the liberal leader in Europe in 2017, while America is now legislating as Nazi Germany did.
Trump did not shake her hand and he did not even acknowledge the requests that he do so.
He behaved as a scolded sulky school boy.
Imagine if Clinton was President and what that world would have, could have, should have,  looked like.
President Trump meets Chancellor Merkel for the first time – BBC News 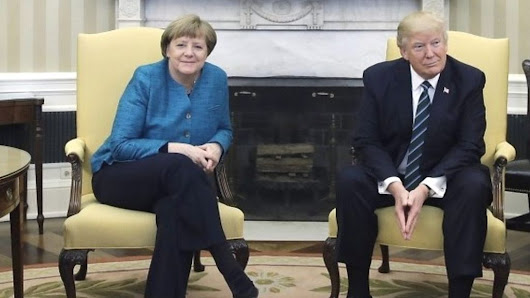 “The Leader of the Free World Meets Donald Trump: Angela Merkel, whether she wants the job or not, is the West’s last, best hope.”

“Their styles reflect their vastly different backgrounds. Merkel, Germany’s first and only female chancellor, was raised by a pastor in communist East Germany, where she earned a doctorate in physical chemistry. Although she is the longest-serving and most powerful leader in Europe, she is unfailingly modest, competent and consensus-oriented. Trump’s all-about-me mentality, Queens upbringing and brash, tabloid-and-reality-TV personality couldn’t be more different.”

“One indicator of a real breakthrough between Trump and Merkel would be a recognition that he is hearing out her concerns about Putin. Merkel is the wisest leader now in office in assessing the danger from Russia, and the most experienced in dealing with Putin himself. She’ll likely urge him to cool his enthusiasm for rapprochement with Moscow—will he listen?

The Russia question will play out over many months. In the meantime, those who care about Western values can continue to look to Merkel, but now with a small dose of optimism. For while this week’s election in the Netherlands may not be a permanent setback for Europe’s neo-nationalists, it should give comfort to those who worried that Trump’s victory in America would be contagious and that continental Europe was sure to catch the disease.” 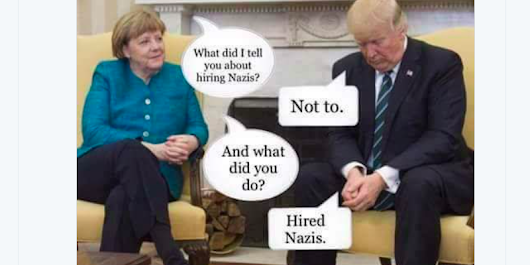 The Leader of the Free World Meets Donald Trump 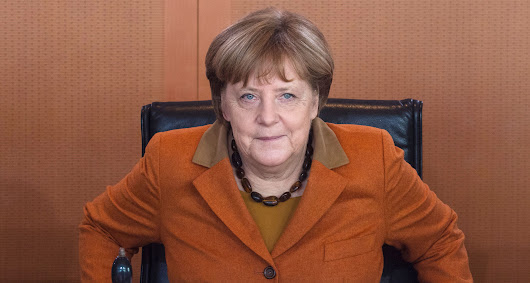 https://www.theguardian.com/us-news/2017/mar/18/us-young-adults-donald-trump-presidency-illegitimate
Most US young adults see Donald Trump presidency as illegitimate | US news | The Guardian 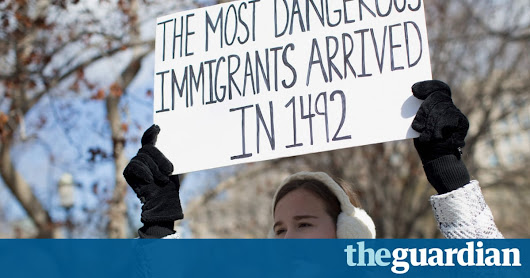 Toronto Star
Yet Donald J. Trump misstated how NATO financing works, saying that each nation agreed to contribute 2 per cent of gross domestic product.
Trump says NATO nations ‘must pay what they owe,’ during tense meeting with Merkel | Toronto Star

Donald J. Trump’s budget calls for billions to be spent on a wall with Mexico. It’s a good thing our schools and roads are in such amazing shape or I’d be pissed.
Nation with Crumbling Bridges and Roads Excited to Build Giant Wall 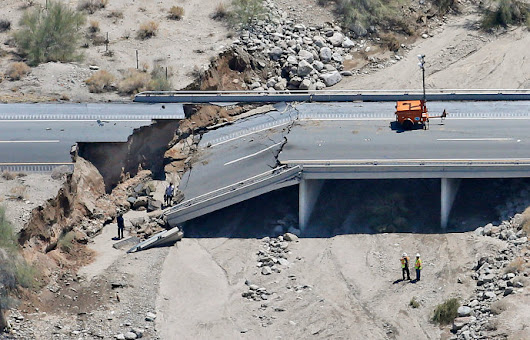 Trump’s Budget Is a Declaration of War on the Environment

Trump’s Budget Is a Declaration of War on the Environment

can we just skip to the UN Trial for crimes against humanity? 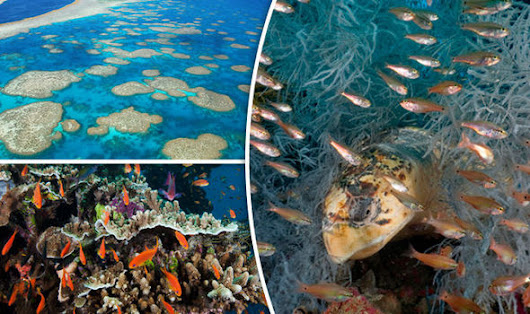 Stress on the Great Barrier Reef

The Great Barrier Reef is the world’s largest reef structure, supporting a huge array of marine life off the coast of Queensland, Australia. The reef’s designation as a marine park helps protect it from some human pressures, such as local water pollution and overfishing. But park protection cannot prevent the heating of ocean water—the main stressor on this coral system and the reason for its bleaching.

The bright colors (and food source) of healthy coral come from the microscopic algae that live inside coral tissues. But the symbiotic relationship is compromised when the water gets too hot. Warm temperatures drive out the algae, and corals turn a pale white—the so-called bleaching that leaves corals vulnerable to disease and death. Fortunately, scientists have ways to monitor the reef. And they can do so remotely.

Coral Reef Watch produces maps like this for ocean areas around the world. The level of stress is based on measurements of sea surface temperature, which is derived from multiple satellites including Suomi NPP. But to figure out when conditions are deviating from normal, scientists first had to define normal. Defining this “climatology” is where the Pleiades supercomputer at NASA’s Ames Research Center contributed.

As the map shows, many areas in late February were far from normal; some level of heat stress was present almost everywhere in the waters east of Australia. According to Mark Eakin, coordinator of Coral Reef Watch, the current bleaching on the Great Barrier Reef is part of a global bleaching event that started in June 2014 and has been ongoing. It is the third global coral bleaching event since the 1980s.

“Unlike past global bleaching events (in 1998 and 2010) that lasted less than twelve months, this event is in its 33rd month and shows no sign of stopping,” Eakin said. “It has been the longest, most widespread, and most damaging coral bleaching event ever recorded.”

The reef appears small on this map, and even smaller on global maps. But providing data only over reefs would exclude the bigger picture. “The conditions in surrounding ocean waters is very informative when trying to understand what is and may soon be happening on reefs,” Eakin said.

Scientists are making progress in gaining that understanding thanks to a combination of this satellite-derived information and some recent aerial and underwater surveys of the Great Barrier Reef. In new findings published in Nature on March 15, 2017, researchers showed that severe heat stress and bleaching spanned the northern 1,000 kilometers of the Great Barrier Reef during the severe bleaching of 2016. In contrast, earlier events in 1998 and 2002 severely bleached the reef farther south. At one time or another, bleaching has affected almost the entire span of the reef.

The ARC Centre of Excellence for Coral Reef Studies noted in a statement about the new study: “Coral bleaching events should no longer be thought of as individual disturbances to reefs, but as recurring events that threaten the viability of coral reefs globally.” “GreenLeft was the big winner in Wednesday’s poll, leaping from four MPs to 14 in the 150-seat parliament, topping the bill in Amsterdam and overtaking the stricken social democratic PvdA to become the largest party of the left nationally.

It is far too early to say whether Jesse Klaver’s GreenLeft will be a party of government for the first time in its history. But for the 30-year-old leader of a political party, the Netherlands’ youngest ever, it was not a bad election.

As traditional left and centre-left parties suffer across Europe in countries including Italy, France and Britain, the Dutch GreenLeft, formed 25 years ago by a merger of communists, pacifists, evangelicals and radicals, is growing fast.

A large part of its success is down to Klaver, a boyish figure in jeans, open-necked shirt and rolled-up sleeves who was first elected as an MP at the age of 24 and took over the leadership of GreenLeft in May 2015. Since then, under the “Jessiah”, as he is nicknamed, the party has gained 7,000 new members, nearly half of them under 30.

Something of a throwback to classic 1970s Dutch ideals of openness and radicalism, Klaver has a Moroccan father and a mother of Indonesian descent. The far-right populism of Geert Wilders, rather than Muslim immigration, is the real threat to Dutch culture and traditions, he has repeatedly said.

Properly leftwing parties in Europe had to fight the rise of the far right by standing up for their ideals, he said on Wednesday.

“What I would say to all my leftwing friends in Europe: don’t try to fake the populace,” he said. “Stand for your principles. Be straight. Be pro-refugee. Be pro-European. We’re gaining momentum in the polls. You can stop populism.””

New Countries Favor Canadian Charter of Rights and Freedoms, US …

http://www.mintpressnews.com/new-countries-favor-canadian-charter-of…us…/24184/
Apr 19, 2012 – (MintPress)-Once a model for emerging democracies worldwide, a new … New countries are more likely to use the Canadian Charter of Rights …

Canada’s Charter of Rights: a global model – The Globe and Mail

Feb 10, 2012 – Canada’s Charter of Rights and Freedoms, once thought to be tilting this … United States, is viewed as distinctive and a model for other nations, … 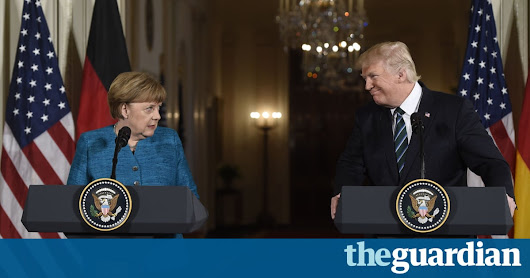 ‘That’s not how it works’: Trump’s grasp of Nato questioned after Merkel tweets | World news | The Guardian

The Paris COP21 climate treaty dead because of Trump’s 2018 budget plan for the USA???