The flight path of Prentice’s Cessna Citation and the location where the plane disappeared from radar. Image via Flightradar24.com

Updated
The Globe and Mail
Retired RCMP officer identified as pilot in crash that killed former Alberta premier Jim Prentice: A statement released on behalf of the family of Jim Kruk on Saturday said the 62-year-old resident of Airdrie had been a pilot since 1976, and pursued aviation further in 2007 after a full career with the Mounties

The Conservatives, not really progressive, pro-business but anti-science, are now scrambling Federally and Provincially. 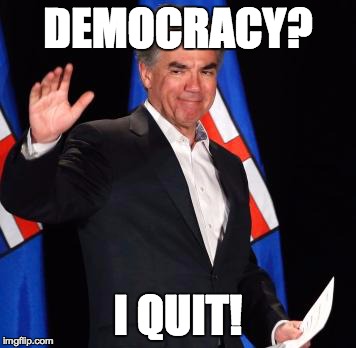 who is she reminding me of? Pop Up Culture References Quiz Who is Canada’s Sarah Palin?

In the Media News:

As prime minister, Justin Trudeau’s travel and living expense bill is paid for out of the budget.

Oct 14, 2015 – Conservative Health Minister Rona Ambrose billed only $649 for her trip to Vancouver in 2015, and Natural Resources Minister Greg Rickford …

reality, it goes on. legacy, eh.