Linda Thompson is apparently finally writing her autobiography to cover her life, which includes 5 years with Elvis Presley and her marriage to Jenner and likely her later marriage to Canadian David Foster and her award winning song writing. Maybe something about cosmetic surgery…

Linda was Miss Tennessee and George Klein, memphis DJ and pal of Elvis’ introduced them. They were inseparable for the first year and Elvis brought Linda into his family and brought her family into his organization. her brother Sam was there on August 16 and in charge of Lisa Marie.

Linda with with Elvis as his main girlfriend for 5 years, before his last official girl friend, Ginger Alden.

Fans in the 1970s seemed to like Elvis and Linda, and Ginger was blamed as being too young and out of depth, that Elvis wouldn’t have died had Linda Been There.

Which was partly why Linda wasn’t, it’s hard to watch someone you love pill themselves to death and Elvis was in deep major depression when Ginger’s sister Terri, the new Miss Tennessee was brought by George Klein.

Elvis Presley: a life in photos 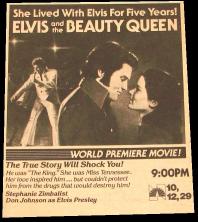 Tabbing Through the Tabloids: Bruce/Belinda Jenner