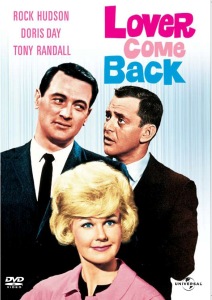 She is always a prude and he’s a scrounger bachelor who plays gay to secure her attention, to seduce her and by the end credits, marry  her.

Before MadMen there was Lover Come Back about the ad-game. In fact, at the time of the movie Psychiatry was very in, which, given that Sigmund Freud’s actual nephew basically invented American advertising in the 1940s (clue: the purpose of advertising is to lower your self esteem until you brand with their product -emdash- while Propaganda is to brand an idea into you) – was pretty telling. \

Before, advertising was sold on the basis of it’s value to you.   Coke a Cola was the first product to rebrand from a snake oil energy drink to a just for fun refreshing beverage. The original secret ingredient was cocaine. Sugar and Caffeine are just as addictive. 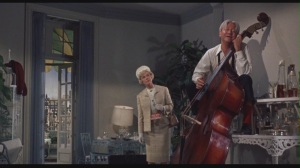 The movie leaps right into the gender war – that women get to work in the business, but they don’t participate where the real business happens and where how deals are brokered and relationships in business networks are done.

Campaigns and what they promise vs what they deliver and producing a product that undermines an industry that also advertises…. 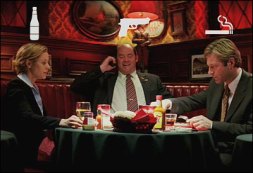 Merchants of Death – advertising, propaganda and lobbying – from Tobacco, to Climate Change (Oil); Deniers and Deniability – there can always be more studies… 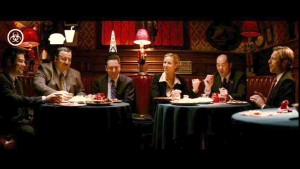 Strategies vs Tactics, Industries that Share Best Practises and Professional Ethics… well… insofar as their professionals have ethics….. amoral… athic….pathic…psychopathic

doing the same thing over and over, because it works..short term…

whoever dies with the most toys (player 2) or followers (player 1) wins?

how about we say there’s enough produced weapons and no one gets to build any any more.

so if you want em, you better make sure you intend to drop them.

all I can hear is Chris Rock in my head, that routine he has about guns are free, but bullets cost $5,000 each.

sorta like printers should be free for a toner contract. apparently stating the obvious as if you;’re offended is the new funny – although Danny Bhoy is freaking funny. that joke apparently killed over in the UK but it was flat in Canada. we’re very gadget savvy, so it’s not new to us… cell phone contracts  < head explodes> seriously

6 Responses to Business and Advertising: Movietorial