The Bankrupt “Ethics” of Jesus

it is no wonder they confuse genocide with love. what is strange is how people today confuse Jesus with Santa Claus.

The Age of Blasphemy 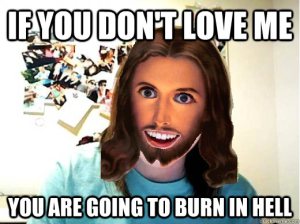 The mad messiah Jesus of the NT is little more than a recycled version of the maniacal, criminally insane Yahweh of the Jewish, tribal, theocratic-fascist OT cult.

As an ‘archetypal’ for love or ethics, the Jesus of the NT fails miserably and as abysmally, as does its predecessor, the genocidal, bloodthirsty deity of the OT, that sadistically demands love, otherwise torture, suffering or death await you.

The culturally, woo-filled, cognitive niche; in reality the mental disease of Christ-psychosis, prevents brainwashed cult members from applying typically rational and logical thinking to the fable of Jesus; as they might to any similar religious, cult figure.

Image the public outrage if, in place of the insane, hate-filled Christ-jihadist; a current, fanatical Islamo-fascist, Islamist-jihadist cult leader; was widely reported to have commanded that his crazed adherents must, “hate his own father and mother and wife and children and brothers and sisters, yes, and even…

This entry was posted in Zeitgeist Analytics. Bookmark the permalink.