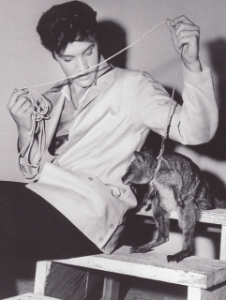 Elvis Presley was gifted a number of exotic animals, which he donated to the Memphis Zoo – such as this Australian Wallaby from the 1950s.

Scatter lived with Elvis at Graceland and traveled to LA while Elvis made movies. 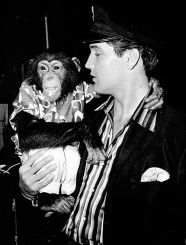 Scatter liked to rush at women and pull their skirts up. He also drank alcohol and turned into a total primate.

Elvis Presley, famous as a child for his warbling “Old Shep” and then burlesqueing “Hound Dog” – didn’t ever have much luck with his canine companions either – he ranged from the small toy dogs Gladys preferred to the larger Chows and Great Danes.

The Hillbilly Cat was not fond of cats, although Lisa Marie had a cat when she was a child at Graceland.

Elvis had peacocks for a while, until he caught them resting on his Rolls Royce and scratching the paint.

He had horses – and when he got Graceland it was undeveloped and the City of Memphis grew out to extend around Graceland.

The image of Elvis is the strip mall that was mostly rededicated to Elvis shops when I was there in 1987 but those Mom n Pop shops were since replaced by more licensed larger stores. 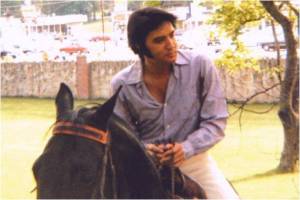 Col Parker’s fave animal of all was The Elephant.

It is really too bad that there isn’t any news reel footage of the Elvis Presley all midget fan club that Parker arranged the Elephant and banner for, eh. 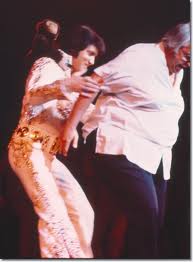 Getting the Monkey off your Back

1973 This was a very memorial day for Elvis and the group. Elvis concluded the engagement by arriving on stage for his final show on Lamar’s back with a toy monkey attached to his neck. Then he joked around … Continue reading →

Frogs, bears and bees! Oh My

the indicator species are disappearing!     hibernating species and species that span environments like amphibians   they are indicators of the health of the environment   because they are not thriving and barely surviving

The actual science teacher didn’t teach the class. John T. Scopes did and he knew it was going to be a trial, just not quite so literally. 90 years ago Religion vs Science in the courts over the public school … Continue reading →

Clan of the Cave Bear

The Earth’s Children series by Jean M. Auel is one of my most fave series of books. I read the first book back in 1980 when it first came out and have waited agonizing years and even a decade in … Continue reading →

3 Responses to ElvisWorld: Scatter The Chimp