Posted on September 3, 2015 by dykewriter 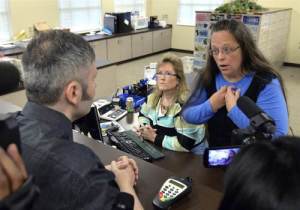 Kim Davis is North America’s newest Christian Martyr – an honest women, although divorced herself those several times, is now in jail, for not obeying the Supreme Court, the Governor of the State, her department employer and her supervisor. Praise Jebus.

If only people will pray for or to her and claim that she has cured them of illnesses that they were never diagnosed with and are unconformable anecdotes which eventually will be deemed something you’ve heard of. hall a luau brothers and sisters

why is sincerity of belief deemed a good thing again?

I am pretty sure that the job description she agreed to sign had to do with following the rules of the employer who signs her paycheque. pay check (american) and that a job requirement is being able to read and understand the law, directives and workplace practices….

Most of all – why is Kim Davis, who poses no risk of flight and no risk to the community simply not put on administrative leave until she is willing to do her job?

There is no reason for taxpayers to spend money putting her in jail and creating a martyr.

She can make her dispute through her union if they are willing to take her case….

it just seems like the American levels of government really do not want to get into reminding religion that it is separate from the state.

religion is not taxed because they are not supposed to politic from the pulpit – but they do.

religion props up too many governments as theocracies or inflated important of churches used to be where politicians courted to get influence – letter writers, insta crowds and votes.

people think they are voting morality and that is private – and not part of the governments business – as long as age of consent and consent occur.

which is where religion interferes and tried to tell people not only with whom, but when and how and for what purpose. it allows for spousal rape and assaults and incest in fact – things which are no longer okay in the North American community standards.

it is what the 1970s were about. all the bra burning and equal pay, eh? being able to sign own’s own contracts and not have a father or husband sign for real.. for you… co-sign.. undersign.. whatever word they put on the form then.

here’s a clue – go in and take the men who are doing the crimes – bigamy, sexual abuse and exploitation, tax evasion and illegal smuggling of women between Canada’s 1 LDS community in Bountiful British Columbia and the USA’s 2 – one in Texas and one in Colorado – sorry closed community – too late to learn science and understanding gene pool collapse and in-breeding.

Did we learn nothing from the crazies and hemophiliacs in the Royal Families of Europe? Banjos .. I hear Banjos….

religion is incompatible with equality – which is what is guaranteed by secular law.

there is only one land of the land, and it’s secular and applies equally to everyone.

religion and ignorance of the law is not an excuse, cause or ability to evade law.

humans and their imaginary lines

“I don’t see any gods up here” Russian Space Guy

“What strikes you, is that there are no lines on the earth” Canadian Space Guy

The Law vs Religion

On God and The Law

Good article. A more natural outlook, admitting we don’t know it all. I always defend the freedom and choice (or luxury) to open or close our eyes if it can be afforded. My defenses come out when any religion … Continue reading → 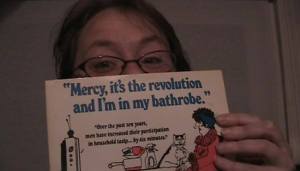 News Aversion Therapy – Vancouver Sun – it’s Pride Weekend in British Columbia. I can’t cope with the crowds or the Burb to Core Commute, during an event that draws international tourism and is the biggest parade in BC, now … Continue reading →

The purpose of a crime is to accomplish an object and reap the benefit without detection and avoiding consequences. Although, I have an hypothesis about repeat offenders being deep closet cases who thrive better in prison, which appears to … Continue reading →

What is the Harm of Religion?

what is the harm of religion? well: pretty fucking obvious actually 19-Year-old Gang Rape Victim to Receive 200 Lashes and 6 Months in Jail in Saudi Arabia A Saudi Arabian woman must be accompanied by a male guardian — typically … Continue reading →

Zinn Education Project Our hearts go out to the families of Deah Barakat, Yusor Abu-Salha and Razan Abu-Salha (Learn more at: Our Three Winners), murdered in North Carolina last night…. Daily threats and violence against Muslims (including regular attacks on … Continue reading → 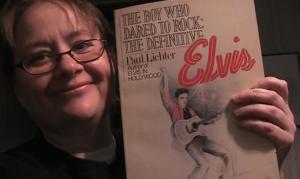 Religion vs Rock n Roll. Grammar counts and the misunderstanding of John Lennon’s words caused a destruction of Beatles records that make collectors cry.   Bible scholar says Jesus is son of false god – that Elvis Presley was the … Continue reading →

2 Responses to That Higher Call to God’s Law, eh.