Elvis Lives Again – he will technorise!

Elvis “live” Hologram Las Vegas Show in the Works: Jamie Salter, the branding guru who owns a majority of Elvis’ estate, is planning a “live” show in Las Vegas with Presley appearing as a hologram. The Elvis Presley show still continues with Elvis boasting 12.4 million “likes” on Facebook and 187,000 followers on Twitter and the recently released a duet with Barbra Streisand. Never mind that he died in 1977.

And that’s just the beginning for the King of Rock ’n’ Roll and ot…her long-dead celebrities. Reviving a corpse from a cryogenic deep freeze is still the stuff of science but every other promotional possibility is on the table. The Elvis “live” show in Las Vegas with Presley appearing as a hologram will be much like the one of Michael Jackson that appeared at a show in Sin City earlier this year. Pinup queen Bettie Page, managed by dead-celeb superagent Mark Roesler, is slated for a holographic burlesque herself. 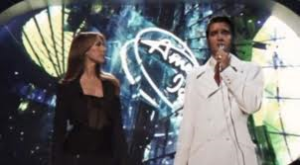 Today, deceased icons from pop culture’s heyday are enjoying unprecedented success, out-earning even their former flesh-and-blood selves, says Salter, one of the new breed of brand managers using technology to wring big bucks from superstars otherwise resting in peace (or so we hope).

These late luminaries are profitable in part because they first captivated fans in a pre-Internet age of truly mass media, dominating the popular imagination in ways few contemporaries can match, Salter says  Even better, they aren’t able to create the sort of mischief that bedeviled their handlers back in the day, potentially damaging their brand in the bargain. They can no longer lapse into drug-induced comas in hotel rooms (Elvis), assault girlfriends with vodka bottles (Jimi Hendrix) or set themselves on fire while freebasing (Richard Pryor). “They can’t get pulled over for drunk driving, their reputations are intact.”

Model Kate Moss, by contrast, can still embarrass sponsor Burberry Group Plc (BRBY) by appearing to snort cocaine on the cover of a British tabloid. Bets on the dead have lately paid off big.

“We bought Elvis at the right time,” Salter says. “None of the kids listen to his music, but look at how they’re dressing, and their flipped-up haircuts.” For a page ripped straight from Presley’s pompadour playbook, just Google Justin Bieber’s latest coif.
(News, Source;Bloomberg/ElvisInfoNet)

so why bother with actual people celebs at all?

it never occurs it is that we care about the person that we want to know about their life, good or bad

unfortunately, we love our celebs to death

Measuring Up to Elvis

Why Elvis remains the bar

Elvis vs Artists, Studios and his management

Elvis the first and last entertainer the whole world agreed on