80s SciFi: V from miniseries to series and reboot 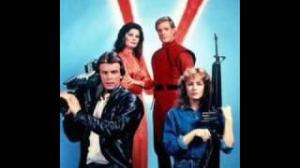 I thought that watching one of my all time fave shows would help.

I have both mini series and the tv series on dvd.

but I find that the political bickering in the Visitor world combined with the inherent violence of the show, is really not the best thing to watch to feel more positive about the world, and I already understand those kinds of people too well.…

I remember that in the mid-80s, this show took a lot of heat from parents watchgroups and its’ funny to think that Al Gore’s wife Tipper lead the charge to put warning labels on music in this decade

V was determined to have more violence than any other scripted tv and probably only the news was worse, being about actual violence

The original V miniseries was astonishing in terms of the marketing as well as a great reminder about what the signs of dictatorships are.

The follow up miniseries and the spin off books and comics. This was one of the first shows that I totally geeked on. I even created a fan site for the merchandise as a niche site among the other V fans sites in the Webring.

The TV series flatlined, creating too much separation between the rebels and visitors and focusing too much on newer series rather than miniseries faves.

the recent reboot was pretty good, but I didn’t see season 2 in which Jane Badler appears so I have decided to get season 2 as my treat for this month.

part of recovering is going above maintenance and into pampering.

fantasies are a nice economical way to treat yourself too.

7 Responses to 80s SciFi: V from miniseries to series and reboot