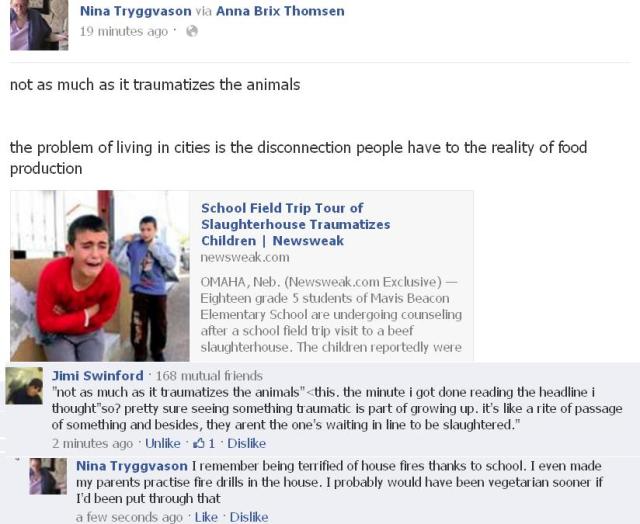 When I came out in my 20s, there was a lot of pressure in the lesbian community to be vegetarian.

it seems to me that the carnivore-veggie issue was almost as intense as negative-positive couple decisions.

I remember going to a pot luck with a tray of baked chicken wings – and despite being the target of scathing looks – that was the first emptied contribution the carnivores covertly consumed rapidly. Presumably to remove the offense from the vegan eyes.

Even in non-queer gatherings, at a geek party, the lone vegetarian made scathing comments as the rest of us fondued bits of beef, lamb and chicken.

So when the hostess realized the veggie tray had been left inside and brought it out – the Veggie then loaded her skewer and, as she was about to dip her tempura battered veggies

I pointed out that she could hardly cook them in the same oil as meat.

I am sure the words tasted unpleasant as she ate raw veggies.

which are better for you than deep fried in any event.

I had watched the SuperSize Me Documentary and was interested that the recovery plan was vegetarianism.

For the last 6 or 7 years, I have become squeamish about meat, unable to cope with any parts that looked like parts of the animal – and for a long time, processes was what I could emotionally cope with – because I had stopped caring about my health

Last February, I went vegetarian – and I find one bonus benefit of raw food is less mess of preparation. Wash and eat with peels on – it’s where the majority of nutrition is after all.

if we are going to continue as a species, we need to stop acting like we have dominion over everything, because we don’t know enough for responsible stewardship of the planet and all the life on it.

Going vegetarian allowed me to resolve an ethical crisis and once that was solved, I was able to begin a cascade resolution of a lot of issues – I haven’t solved all my problems yet. The big questions remain.

But it’s easier to battle monsters when you are not being devoured by bugs.